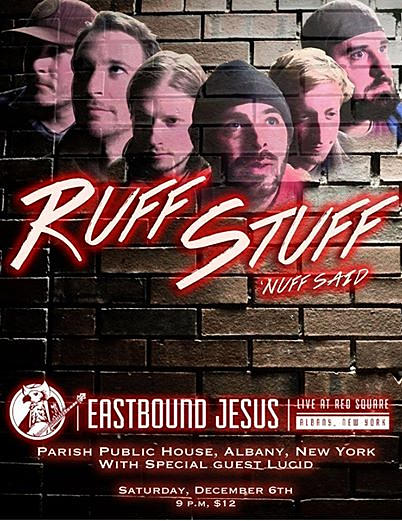 It’s almost halfway through the show, Lowell Wurster & Jamie Armstrong from Lucid join Eastbound Jesus on the stage. They start to play and almost immediately you feel the boots of the crowd stomping into the floorboards – the harmonica and sax accompaniment from Plattsburgh’s homeboys are a perfect blend with the Greenwich group’s low-on-the-hip hoedown sound, and you start to understand why EBJ sings about the north country and not being in Tennessee no more… The cornfields & ice fishin’ holes of upstate New York have all the country you could care to find in 49 other states.

But that’s not how all of this started, just the crest it builds up to. I showed up early, caught a few words with Lowell at the stage door about Lucid’s new bus, and the prospects for a paint job that would honor the memory of “Lucy,” the band’s trademark Bluebird retired a few years back. I also caught some creole catfish from the new kitchen at The Parish Public House, formerly Red Square, which has re-branded itself in an authentic New Orleans style, while keeping the dance floor murals familiar from so many years of great shows.

Before I could polish my plate — almost licked it clean — Lucid opened the show with “Psychedelic Circus.” I set down my fork and sauntered up to the stage, finding the floor already full of faithful fans, moving their bodies to the groove with just enough elbow room for some fancy dancers. Lucid has an inexhaustible catalog (seriously, I’ve seen them do 6+ hours in a weekend at their legendary Backwoods Pondfest), but with a 90 minute opening act, we still got a good cross section of old faves & new raves, including “Ground On Up,” “Boats,” and “Whiskey Dreams,” from their newest album Home Is Where We Want To Grow. We also got a treat with a cover of the Pointer Sisters “Yes We Can Can,” reminding the audience that now is the time for all good men to get together and try to live as brothers. Wrapping up, Lucid jammed out their anthem “Backwoods,” displaying the full array of talent they have to share. It’s hard to peg Lucid as a jam band, they coin their own sound … They’ve got the boxcar blues, wearing swing-step shoes; they jazz like the St. Louis flows, and they rock where no moss grows – all that, and a bag of chips. After the set, I stepped outside to talk with Kevin Sabourin for a minute, who seems optimistic that Lucid may be lining some shows up down the seaboard soon, no details or dates yet, but keep your ears peeled if they come your way.

I re-entered the house halfway through Eastbound’s first song, unknown & unnamed, like some spaghetti western Clint Eastwood character, and found that the already full house was now shoulder tight to the stage, rapt to Adam Brockway’s smooth crooning. The first set rolled through several of their americana cravings like “Talkin’ To John About The Weather,” “Ghost Town,” and “I Wouldn’t Know,” tapping toes and bobbing heads around the room with a palpable energy building. When “Katie Belle” started, with Luke Anderson’s quick banjo pickin’, and Zack Infante’s sleek lap-steelin’, I could feel the hairs on my neck pricklin’, and a deep in my bones feelin’ – I wasn’t the only one, the release was sweeping across the room. From here out, the show was unrepentantly rambunctious; fan’s faces beaming smiles for “54 Miles,” with a crowd shout in the third verse “about a band called EBJ!” The second set featured the signature Smokey & The Bandit track by Jerry Reed, “Eastbound And Down,” as well as another righteous, unreleased track, “Hawk,” yet to be recorded in their upcoming studio sabbatical.

Eastbound Jesus blessed us in the encore with an “I Don’t Use It Much” playing right into a very bluegrass “Love Light,” by the Grateful Dead, not unlike the track on their new live CD Ruff Stuff – ‘Nuff Said, released at this performance, and recorded in the same room!

Don’t feel bad if you missed this sensational show; both bands have live material online: Lucid can be found on Reverbnation and Youtube (I suggest using “rulucid” as a search word, though), and Eastbound Jesus has a page on Bandcamp with both of their studio albums as well as the new live release.